“If you frighten easily, do not bother to learn the art of sword fighting.” Or, at least, so advises the 15th century fighting master Johannes Lichtenauer. While the Italian master Fiore del Liberi says, “If you lack boldness of heart, you lack everything.”

Writings on the practice of historical martial arts are filled with statements about acting boldly and bravely, and historical chronicles generally describe heroes as knights and warriors who operate (seemingly) without any sense of fear, whether in war or duel, tournament or game.

A similar stereotypical image of a modern martial arts studio is one in which there is little tolerance of fear: Where muscle-bound, buzz-cut fighting masters roar at students, drill-sargeant style, for giving in to physical or mental weakness or hesitation, and where the walls are decorated with slogans and quotes urging practitioners to treat fear or doubt as a weakness to be tamped down and rooted out.

But, let’s face it, every one of us is born with a good, healthy, important fear-response to risk, danger, and the threat of physical or emotional harm. Willfully ignoring “fear” can result in a variety of hazardous situations – from unsafe behavior on the training floor, to outright overriding your own sense of self-preservation in situations of clear and present danger. 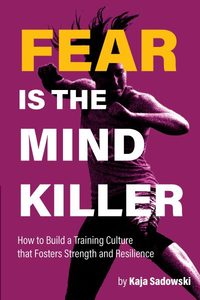 So in the practice of martial arts (whether historical sword fighting or modern self-defense combatives), should we, in fact, seek to eliminate our fear? Or does acknowledging “fear” (hesitation, intimidation, knowing your own limits) actually make us better, more mindful martial artists? Do chivalric principles like humility, courtesy, and cooperation deserve as much consideration in martial arts training as ferocity, courage, and fortitude?

Author and martial arts/combatives instructor Kaja Sadowski joins Scott Farrell for a conversation about her new book Fear Is The Mind Killer, and the chivalric virtues of humility, prudence, and caution as they discuss the productive management of fearfulness as part of the code of chivalry.