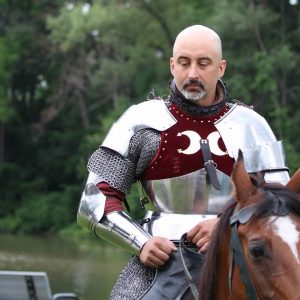 Whatever else you may say about our current state of affairs, this is undoubtedly the golden age of binge watching. And for those with any sort of interest in knights and armor and epic adventures, one of the binge-worthy series of choice is certainly Game of Thrones.

Whether you’ve seen the series a dozen times since its first season aired on HBO in 2011, or you’ve used your self isolation practice as an excuse to finally see what all the nerd-culture fuss is about, George R.R. Martin’s heroic fantasy is a great story – and it is unarguably the defining icon of medievalism (that is, the pop culture perception of medieval history) of the current moment.

But how closely does Game of Thrones mirror real events and personalities of the Middle Ages? Why are we, as Americans in particular, so fascinated with a period of Western history that (in many ways) is the polar opposite of American ideals? And what can the novels and the television series of GoT tell us about our own understanding, or rejection, of the code of chivalry?

is a medieval researcher, historical fencing practitioner and instructor, and avid Game of Thrones fan. He is a long-time participant in medieval reenactment activities with groups like the Society for Creative Anachronism, and is a certified fencing instructor (specializing in historical fencing) with the U.S. Fencing Coaches Association. He received his Ph.D. in history from Fordham University and has taught inter alia at University of Massachusetts, Boston University, and Westfield State University on topics ranging from the history of time and science, to imperialism and global interconnectedness, to (of course) the history of jousting, armor, and courtly culture. He has been widely published in both academic and popular online and print publications. His books include “Fencing: A Renaissance Treatise,” “On Time: A History of Western Timekeeping,” and “The Knightly Art of Battle.”

One of Ken’s most recent books is “Game of Thrones and the Art of Medieval War,” from McFarland Books. Ken joined host Scott Farrell to discuss the parallels between the world of Westeros and the European Middle Ages, and how the universe of Game of Thrones provides a mirror for us to consider our own perceptions of ambition, duty, and chivalry in the modern world.